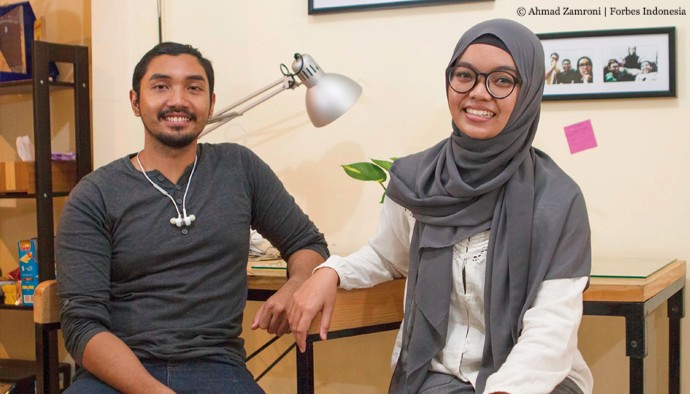 Indonesia’s agricultural logistics is notoriously inefficient, with many layers of middlemen. This system can mean that prices are higher than they should be, and also swing wildly depending on demand, the time of the year and the weather. For example, the price of chili, a common ingredient, last year fluctuated between Rp 28,000 and Rp 108,000 a kilo within less than 12 months.

Looking to bring stability, transparency and better pricing to the agricultural sector is LimaKilo, a startup founded in 2015 that cuts out the middlemen and directly connects end-consumers with farmers through a site and mobile app. The company, known formally as PT Limakilo Majubersama Petani, was started by three entrepreneurs: Lisa Ayu Wulandari, 27; Walesa Danto, 27; and Arif Setiawan, 26.

The firm connects farmers in villages with consumers in big cities and eliminates middlemen in the chain. Users of LimaKilo are able to order commodities such as shallots, chilis, sugar and potatoes directly from the farmers at minimum order of five kilograms (hence the name, “limakilo” which means “five kilos.”) By streamlining the process, customers can buy goods off the site at prices cheaper than normal market prices.

The firm’s roots go back to August 2015 after winning a government-sponsored Internet competition, Hackaton Merdeka 1.0. The three made a presentation in front of President Joko “Jokowi” Widodo. “We presented our idea in front of Jokowi. It was only five minutes and after the presentation, we walked and talked together. The informal talk changed everything. He asked, ‘How many weeks do we need to finish the project?’ We got one month to prove that our business model can work,” says Lisa. The Limakilo site shows a photo of the founders shaking hands with Jokowi. The Ministry of Communications and Information officially launched the site in early 2016—one of a handful of startups being championed by the government to bring digital disruption to the agricultural sector.

The three picked shallots as their first commodity, because it is the third highest-consumed commodity after rice and sugar, at 2.5 kg per capita per year. To learn about the supply chain, the team visited Brebes in Central Java, as the region is Indonesia’s largest shallot producer. Having a 700 kilo order to fulfill on their pilot project, the trio bought shallots from several sources, including in auction and directly from the farmers.

They learned how most farmers sell their crops to middlemen before harvest. “Around two weeks before harvest time, the middlemen make a calculation of how much the crops will be worth,” said Lisa. The middlemen take a profit of 65% after they grade and pack the shallots, and ship them around the country.